A couple of years ago, my younger son Bailey and I were watching the Paula Deen show together. Bailey showed an interest in making Paula Deen’s baked Coca-Cola ham.  Together we made the ham. Since that day, whenever it is requested Bailey prepares the ham for the family or for a crowd. This has become his trademark recipe.

We traditionally think of preparing ham for the holidays but, ham is a wonderful way to feed your family or your guests, and still have plenty left over for ham sandwiches and other meals throughout the week. Also, a baked ham is easy to prepare and is easy on the family food budget. 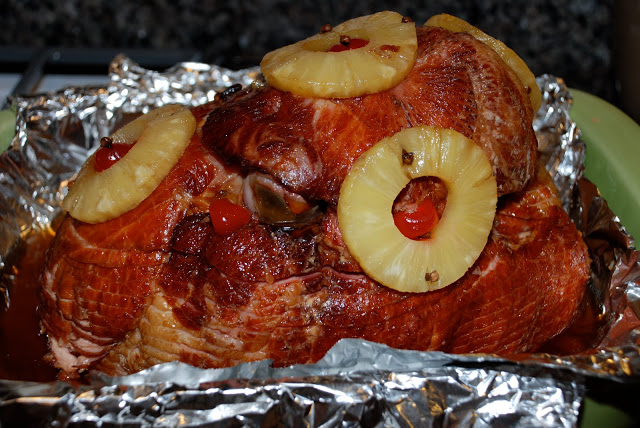 Baked Coca-Cola Ham
Serves a crowd
Recipe from Paula Deen
Ingredients:
1 (10 pound) fully cooked ham
2 (12-ounce) cans cola
Canned pineapple rings
Light brown sugar for sprinkling
Maraschino cherries
Cloves
Directions:
Preheat the oven to 325 F.
Place the ham in a shallow roasting pan.  Baste the ham with cola. With toothpicks, stick some pineapple rings on the ham, about 4 or 5 rings. Sprinkle some brown sugar on the rings.  With toothpicks place a cherry in each pineapple ring hole, and then stick some cloves in the rings.  Cover it with foil and bake 15-18 minutes per pound of ham, or until the ham reaches an internal temperature of 140 degrees F. Baste with cola about every 30 minutes while cooking.
Enjoy!

View all posts by fvknapp